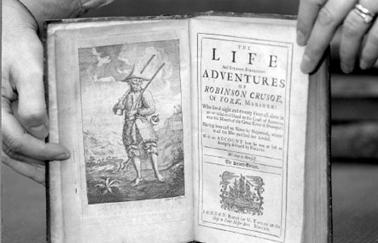 Generations of children have been spellbound by Robinson Crusoe's exploits, but few are aware of the real-life figure who… Continue

Australian Trade Minister Simon Crean says he wants to ensure that the proposed "PACER-plus" trade agreement with the Pacific Islands provids the basis for long-term sustainablilty in the region.

Four teams are taking part this this build up tournament ahead of the World Youth Championships later this year.

“Fiji sent out a clear… Continue

USP students in Fiji talk about their future

Students at the University of the South Pacific have just returned for the start of the academic year. Pacific Correspondent Campbell Cooney speaks to some of them about their courses, which Pacific countries they are from, and what they hope to do with their qualifications once they finish their tertiary education. Fifty Tongans have been temporarily employed as fruit pickers in Australia, the first of more than 2,000 Pacific island farm labourers from Tonga, Vanuatu, Kiribati and… Continue

Three fishermen from Kiribati who went missing at sea for nearly five weeks have been found alive on an island in Papua New Guinea.

The fishermen were taken adrift by rough seas until they were discovered by Papua New Guinea villagers this week.

Authorities in Kiribati thought they drowned, but the men survived on fish and sea water for… Continue

CHURCH leaders in Fiji will be among those who will benefit from the $177,290 Australia has donated to the Pacific Conference of Churches (PCC).

The donation, sealed in the signing of a Memorandum of Understanding between Australian High Commissioner to Fiji James Batley and PCCs Fe'iloakitau Tevi in Suva today, is to fund human rights training workshops in… Continue

Everybody knows Fiji as the epitome of the romantic tropical getaway. But cloistered inside the sanitised confines of a premium Denarau Island hotel or resort, what are you going to see of the real Fiji?

We will try and keep these links updated as often as news becomes available out of Kiribati. All these newspapers are in I-Kiribati language.

Australia has appointed career diplomat Brett Aldam as its next High Commissioner to Kiribati.

Mr Aldam will take up the post in April succeeding Anne Quinane who has been there since 2006.

Australia has maintained a diplomatic mission in Kiribati since 1981.

Adam Fier recently sold his home, got rid of his car and pulled… Continue

The residents of Carteret Islands, north east of Bougainville in Papua New Guinea, are likely to become some of the world's first climate change refugees… Continue

Have noticed some very creative designs going up now on individual Banaban Voice pages. I must say that I am very impressed with the level of design flair some of our members have shown. Maybe we will have to run a competition to see who is voted the best one!

I have been working and designing on computers since my brother, Dan Bridges gave me my first computer back in 1990, his old XT model he assembled.

That was 19 years ago and makes me feel very old. It's so wonderful… Continue

LOCAL National Party MPs had lauded their arrival and church, social services, unions and government officials had lined up to ensure their smooth transition.

2009 has started off as a rather harrowing year. We are in the middle now of one of the largest Financial Crashes for decades which is impacting globally. Countries like USA, Japan, Korea, UK and all through out Europe are financially in panic mode.

Kiribati, Tuvalu and other low lying Pacific and Indian Ocean Islands are preparing for the worse and a future as Environmental Refugees. Fiji and North Queensland in Australia have both suffered from some of the largest and most… Continue

Micronesian representative to the Oceania Athletics Association Council Robin Sapong had already submitted the proposed AU$80,000 [US$51,318.29] budget for the 2009 Micronesian Athletics Championships.

After checking we have discovered that a new member Rose of Omni Hotels in Canada is an Email Scam to solicit all your personal details from you and try and get money out of you. They have now been banned from BANABAN VOICE.... please read more information we have discovered on the web regarding this particular scam. Stacey

*****WARNING THIS IS A SCAM EMAIL YOU MAY HAVE RECIEVED VIA BANABAN VOICE- Please do not reply***
Good day,
I am Rose from Canada, the manager… Continue

When the guest worker scheme was finally approved last year, the Australian economy was travelling along quite well with little unemployment. Now with the global financial crisis beginning to bite, Australia's Deputy Prime Minister Julia Gillard says that it will have an effect on the guest workers scheme. Ms Gillard says the demand for workers from Vanuatu,… Continue

Training of the first group of Pacific Island guest workers in Australia continues as their employers finalise the paperwork required for the scheme to start.

Fifty Tongans who are the first of possibly 2,500 workers from Kiribati, Tonga, PNG and Vanautu are in Robinvale in country Victoria preparing to help in harvesting almonds.

Prime Minister, Commodore Voreqe Bainimarama today received a cheque in the sum of $59, 523.81 from the Government of Kiribati through the Kiribati High Commissioner Her Excellency, Mrs Reteta Rimon.

The cheque is a contribution towards the Prime Minister's National Disaster Relief and Rehabilitation Fund.