THE production of virgin coconut oil is still a niche market and diversification is the only way forward for the coconut industry.This was a statement made by Agriculture permanent secretary Colonel Mason Smith at the 4th Heads of Agriculture and Forestry Services meeting held at the Tanoa International in Nadi last week.

Originally from Ocean Island, the Rabi Island resident has been posted to Rotuma Hospital for one and a half years as a public health nurse.

"In 2009, I was posted to Rotuma and was transferred to do public health," he…

Internet charges in Fiji are set to drop dramatically. Fiji's competition watch-dog, the Commerce Commission, is pursuing a 2-pronged strategy to make sure prices go down.

The first part of the strategy involves regulation to…

Last night 3 News reported from the over-crowded Pacific island of Tarawa in the Kiribati chain. Now we look at a New Zealand Government solution to solve the over-crowding: ship people 3,000 kilometres away to another of the Kiribati islands – the tiny atoll of Christmas Island.…

SOILED SHRINE: Murray McCully at the memorial to 17 New Zealand Coastwatchers. The monument was stained with fish guts and human excrement.

New Zealand's war dead have suffered humiliation on the hallowed ground of one of the 20th century's greatest battles. Foreign…

EMPOWERMENT programs for women and young girls on Rabi island have been set up to help them earn money through small businesses.

The programs, drawn up by the Banaban Child Welfare, are the result of a recent survey which revealed an increase in dropouts.

A MAJOR educational crisis is developing on Rabi Island, with revelations that more than 240 Banaban students dropped out of school over the past two years because of financial problems.

That figure amounts to more than a quarter of the total number of children currently enrolled in school on Rabi island this year (857).

Police are again urging parents to keep a close watch on their children after a 2 year old boy drowned in Rabi yesterday.
Police Inspector Atunaisa Sokomuri says the boy was swimming with two adults when he disappeared.
They later saw the child’s body floating. They tried to revive him but it was too late.
The drowning death toll now stands at 32 compared to 37 for…

It is with much sadness that today at 5am in Lautoka was a car accident which claimed the lives of 3 Banaban youth. 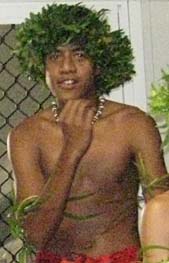 ATH Vodafone Fiji Foundation executive Ambalika Kutty with Rabi participants
MAKING a difference in the community, a group of rural workers have joined the ATH Fiji Foundation's 'World of Difference' program working with civil societies to help improve the livelihoods of people.

In a workshop held in Labasa yesterday, the eight community…