THE Savusavu Copra Mill's crush rate dropped by 28 per cent per month this year, making it far below the monthly rate of 2000 metric tonnes.

This was revealed by Copra Millers Fiji Limited executive chairman Ilisoni Taoba, who said this year's monthly crush dropped to an average of 550 metric tonnes from 2000 metric tonnes.

Mr Taoba said this was attributed to high land…

A GROUP of women in the district of Tunuloa in Cakaudrove are engaged with the learning of virgin coconut oil production to generate income.

Representative Railala Beci said this trade would be a form of self-employment to earn help income for their families, which depended mainly on fisheries.

A spokesperson for Air Kiribati says the airline is not confident that the sudden suspension of its flights between Fiji and Kiribati will be lifted any time soon.

Last week, the Fiji government cancelled Air Kiribati flights between Nadi and Tarawa without explanation, incurring the airline a loss of almost 100,000 US dollars so far.

“A spokesperson for Air Kiribati, Itibwebwe…

Solomon Islanders will experience life changing opportunities with the new scheme.
(Source: photo supplied)
Positive response has been received from Solomon Islands to news that its workers can now be employed on Australian farms through the new Seasonal workers scheme.

600 coconuts a day could power Tokelau

Coconuts and sunshine will soon be the main energy source of the New Zealand territory of Tokelau in the South Pacific.

Foua Toloa, Tokelau's leader, announced this week that by the middle of next year, 93% of Tokelau's electricity will be solar powered – the rest will come from coconut oil. Some motor…

Fine Foods Australia has earned the reputation as Australia’s only truly international event for the food industry. It is the place to find the newest and best products and services on offer and stay abreast of what’s hot and happening in the industry.…
Continue

The sudden suspension of Air Kiribati flights between Fiji and Kiribati has cost the airline almost 100,000 US dollars so far.

The spokesperson for Air Kiribati, Itibwebwe Kabiriera, is yet to hear the outcome of yesterday’s bilateral meeting between officials of the two countries in…


A NEW ice plant is expected to be constructed on Rabi island at the end of the year.

The ice plant will result in fishermen on the island saving travelling costs to Savusavu to buy ice.

The Department of Fisheries revealed plans to construct the plant during the Prime Minister's visit to the island last week. 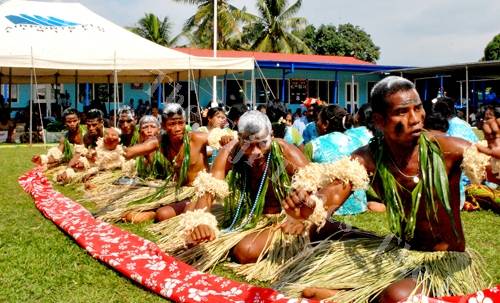 The national airline of Kiribati says about three-hundred passengers have been affected by a suspension of its flights between the capital and Fiji.

An email was sent to Air Kiribati last week informing the airline that its Tarawa to Nadi route, operated by Nauru’s national carrier Our Airline, was to be temporarily halted.

A spokesman for Air Kiribati, Itibwebwe Kabriera says no reason was given for the suspension…

Kiribati gets radical as atolls flood

Kiribati's 100,000 people are considering moving on to vast floating platforms as the rising Pacific Ocean begins consuming their atoll archipelago scattered along the Equator, their president Anote Tong says.

"If you are faced with the option of being submerged with your family, what would you do, jump on a rig like that, or not?" he asked reporters. "I think the answer is yes."

He said the plan, under active consideration, would cost $2… 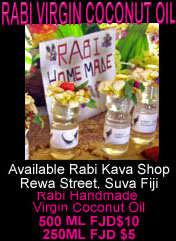 THE production of virgin coconut oil on Rabi Island has become one of the major income generating projects for villagers.

And so far the Banaban Women's Organisation has earned more than $20,000 from the sale of oil to locals and tourists.

Salaseini Vosamana Monday, September 12, 2011
A NEW jetty is expected to be constructed on Rabi next month to improve shipping services to the island.

The jetty will make way for more development opportunities for the Banaban community and the neighbouring islands.

During his visit to the island last week, Prime Minister Commodore Voreqe Bainimarama said the tender was given to Pacific Building Solution and work would commence in October.

THE lack of public transport has forced villagers to walk five miles to hospital and also to do shopping.

The island if Rabi has only one bus that belongs to the island council and serves a population of about 3000.

"We have four villages with more than 3000 people…


MARKET access is still a problem for Rabi islanders.

Rabi Island Council chairman Paula Vanualailai said even though a lot of assistance had been given to islanders, there was room for improvement.

"The Government has been assisting the islanders through development programs, through its roadmap projects like the construction of the jetty but we need the islanders to take ownership and…

THE Prime Minister's Office has assured fairness, transparency and accountable governance for all matters affecting the Banaban people of Rabi.

Prime Minister Commodore Voreqe Bainimarama says this would be done by the Government which aims to create an enabling environment to allow people to maximise the use of their resources.

Speaking to villagers of Rabi yesterday, he said: "The administrative oversight of…

Ban described the tiny Pacific nation, where some villagers have had to relocate in the face of rising sea levels, as "the frontline" of the climate change debate.

While the UN leader said…