Call to save 'dying oceans'

Indonesia's president has called for a concerted move to save the world's oceans from being destroyed by the effects of climate change, but made no mention of his own country's failings in nature conservation. In an address to the World Ocean Conference in the Indonesia city of Manado on Thursday, Susilo Bambang Yudhyono called for a global effort to "rescue the oceans" describing it as "a life and death issue for the community of nations". He said the world's oceans faced a raft of threats from over-fishing, over-exploitation, the extinction of marine species, pollution, and the impact of climate change causing sea temperatures and sea levels to rise. 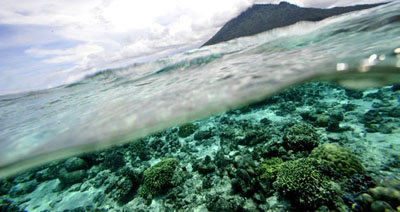 "We must save them from the ravages of abuse and over-exploitation by humankind, from the havoc due to pollution and dire effects of climate change," he said.

"Today it is time for the world to hear yet another important message: that we can only survive the 21st century if we are united in caring for and preserving our oceans." 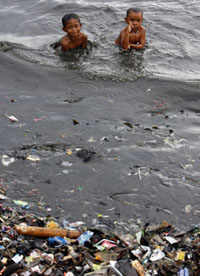 Pollution in Indonesia has reached alarming levels [EPA]
Yudhoyono however avoided mentioning his own country's failings in conserving its environment, ranging from rampant illegal logging to overfishing and the destruction of coral reefs through the use of bombs. Greenhouse gas emissions from extensive logging of Indonesia's tropical forests have pushed the country to become the world's third-largest emitter behind the US and China.

Illegal fishing and pollution are also widespread, with garbage and diesel oil clogging the waters at Manado's harbour close to the conference venue.

Scientists have warned that hundreds of millions of people will be at risk unless drastic action is taken on climate change.

Hundreds of officials and experts from 70 countries are in Manado for the conference, the first global meeting on the link between oceans and climate change.

The five-day conference is being billed as a prelude to talks in December in Copenhagen which is expected to adopt a new commitment on emission cuts to replace the Kyoto Protocol, which expires in 2012.

Earlier this week envoys from several island states warned that the issue of rising sea levels, which threatens to wipe whole nations off the map and displace millions of people, was being overlooked in climate change talks. 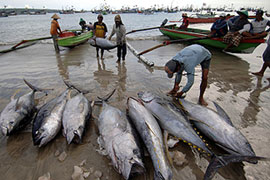 Overfishing is just one of many threats facing the marine environment [AFP]
The Pacific island states of Kiribati and Tuvalu face a serious risk by even small rises in sea levels, while major cities and densely-populated coastlines from Bangladesh to West Africa could go under this century, the envoys said.

In 2007 the UN Intergovernmental Panel on Climate Change predicted that up to 150 million people could be displaced by the effects of climate change by 2050, which include sea level rises of as much as 59 centimetres.

Representatives from island nations say major emitters are pushing for greenhouse gas emissions cuts that are too low to prevent devastating sea rises.

The Alliance of Small Island States is pushing for cuts in greenhouse gas emissions of 85 per cent by that deadline.

Rolph Payet, a presidential adviser from the African island nation of the Seychelles, said the issue of what will happen to millions of people fleeing rising waters and droughts, and how to resettle whole nations which could vanish under the waves has been ignored.

"Dealing with environmental refugees will have a much more serious impact on the global economy and global security in fact than what wars have ever done to this planet," he said.

"We have been talking about war refugees, crisis refugees, but not environmental refugees ... it is not an accepted UN word."