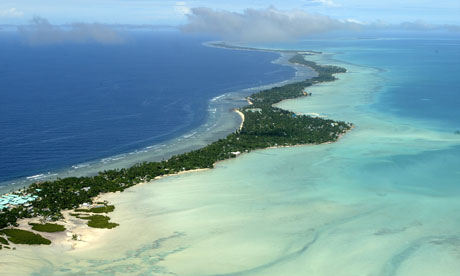 Halfway through this year, Pelenise Alofa left her job managing a cafe in Tarawa, Kiribati, so that she could focus on setting up KiriCAN, an NGO that works with local communities on climate change. Each morning she gets up at 4am and cooks 50 lunches, which get sold at the local school canteen for AUS$1 each. "After the costs, I make about $20, but that's OK, you can survive on that – it lets me buy my rice. And I'm enjoying it - the meals get picked up at 7am, and then I am free for the whole day to work on KiriCAN projects."

Located and spread across the central Pacific, Kiribati, a low-lying chain of islands, is one of the most vulnerable countries to climate change, and it is already feeling some of the impacts, as Alofa's blog, published today, testifies

Access to safe water is scarce, and recent heavy rains caused major flooding. The government is now planning to relocate the majority of the population of Tarawa to the larger – and higher – Christmas Island.

As one of the poorest and least-developed nations in the world, the Kiribati government has said that of all the problems it faces, climate change will eclipse them all.

Today, representatives from Kiribati and many of the other most vulnerable countries in the world, along with delegates from the UK, US, EU, Asia and Africa,will gather in its capital, Tarawa, for the Tarawa Climate Change Conference , to discuss ways to prepare for and address the impact of climate change. A small rise in sea-levels could have devastating consequences for these states. It is hoped that the discussions will feed into the Cancún talks, which begin at the end of the month.

Over the next three days, we will be hearing from local people how climate change is affecting their lives.

• Aaron Pickard is the coordinator for the Pacific region for 350.org, a global climate change campaigning organisation.

Comment by terry atauea on December 1, 2010 at 7:41am
Should the rehab program on Banaba goes well, it will serve as a refuge for those living on islands likely to be devastated by the climate change. It will save my head too from sinking because I am not a human submarine.

Who knows Banaba will once again be a savior not with rich mineral this time but, in salvaging precious lives from drowning like the award winning film, Titanic, that went down with countless innocent people perish with it.