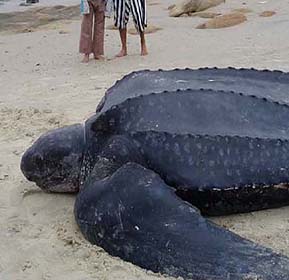 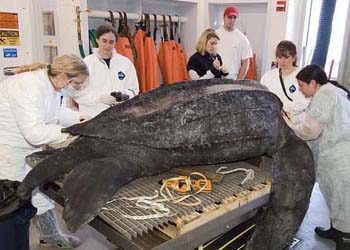 The Ministry of Environment, Lands and Agricultural Development is warning the public from throwing plastic trash out in the open sea for fear of ingestion by the endangered sea turtles. Deputy Director of the Environment & Conservation Division, Mrs. Nenenteiti Teariki Ruatu says turtles especially the world largest turtle the leatherback necropsies which is also available in Kiribati waters is protected under the
Wild Life Ordinance and the amended Environment Act.

“I advise people not to throw plastic trash in the sea at all times not only because are causes danger to these sea animals...but in fact the leatherback turtle is protected under our law,” she added. Meanwhile, a new study in Marine Pollution Bullentin has confirmed that the world’s largest sea turtle is succumbing in
startling numbers to an environmental issue that receives little attention: plastic trash in the oceans.
To conduct his study Dr. Mike James from Dalhousie University and colleagues looked back over four decades of leatherback necropsies, i.e. postmortems of animals.

”We wanted to see if plastics ingestion in leatherbacks was hype or reality,” says James. It has long been
theorized that leatherbacks often confuse plastic trash, especially plastic bags, with one of their favorite
prey—jellyfish. In an unfortunate connection, both jellyfish and plastic trash are often found at where oceanic water masses meet.

“After reviewing the results of 371 necropsies since 1968, we discovered over one third of the turtles had
ingested plastic,” James says.

Plastic consumed by turtles leads to partial or complete obstruction of gastrointestinal tract. While the plastic takes its toll on the turtle’s diet, energy, and reproduction, a complete blockage can lead to
starvation. The more plastic a turtle ingests the more likely the trash will kill it, but even a little plastic can weaken a turtle significantly.

”The frustrating, yet hopeful aspect is that humans can easily begin addressing the solution, without major lifestyle changes,” says Dr. James.

“It’s as simple as reducing packaging and moving towards alternative, biodegradable materials and recycling.”

Leatherbacks are currently classified by the IUCN Redlist as critically endangered. Having inhabited the
earth for over a hundred million years— surviving comets, global warming, and ice ages— it would be badly ironic if the leatherback should go extinct due to something humans consider as innocuous
as plastic bags.

Comment by Kaitu Katarake on March 30, 2009 at 4:27pm
I suggest that it is a good idea to keep our ocean clean not for our sake but for the sea turtles too.