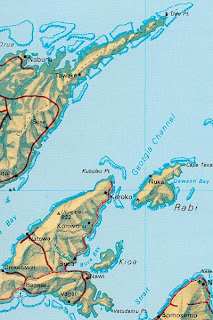 The map shows, from north to south, Eastern Vanua Levu to Udu Point; the Tunuloa peninsula, Vanua Levu, with Kioa (home to Fiji's Tuvaluans) and Rabi islands; and the northern tip of Taveuni.
Rabi island, home of Fiji's Banaban population, was in the direct path of the hurricane but as far as I can tell there's been no official mention of Australian or NZ reconnaisance flights, deaths, damage or relief supplies, although government apparently tried to make contact with the island before the hurricane hit.

We do have a report from Michael Field in Stuff ("Devastated Pacific island facing starvation") that the island is "facing starvation and disease." The report cites Dr Bauro Vanualaila, Rabi Council chairman speaking from Suva, saying the island "is devastated". One person is dead, many houses are destroyed, "all the food crops and fruit trees have gone [and it] will take just another day or two [before] people will starve if no food arrives on the island."

We have not heard what government is doing but the Banaban community in Fiji and abroard seems likely to beat them to it. Thanks to them, food and medical supplies will have reached the island by now.See these Banaban web sites to see how quickly a community can be mobilised. Michael's article provides useful background information on how Banabans came to be in Fiji.

Bad as the situation must have seemed, I doubt there was any likelihood of imminent starvation. The roots of ruined crops like tavioka and dalo are edible long after their tops are destroyed, there are fish in the sea, and the villagers must have had some food stored.

Comment by Stacey King on March 23, 2010 at 9:46am
Thanks Croz Walsh for this blog on our efforts to help our people back home in Rabi. Just to confirm that the waters around the islands are considered "DEAD WATER" after big storms (Cyclones) and can take up to a month for fish to return to reefs. Reports from marine experts say that damaged reefs can also take a while to recover and bring back normal fish life. The Banabans are expert fishermen and rely on the sea to supply them with the much needed protein in their diets. They will be making every effort in coming days to get out fishing that is for sure.
Also the Banabans unlike the Fijians don't breed cattle on the island only a few pigs, which I'm sure will be quickly dispatched as the need arises.
Thanks for your support in helping us get the word out to the outside world. It took three years for international Aid to get to Rabi after Cyclone Ami and as our Chairman has stated, the Island never really recover from Ami and went on over the years to get continual damage from every other cyclone that came there way. You could say a virtual 'Cyclone Alley' up there. Maybe this is why Lever Bros in 1945 sold it off to them cheaply. Although reports at the time that the motives were more practical practical believing that it was only a matter of time in 1945 before Japanese landed in Fiji especially around Rabi in the northern area during their Pacific invasion.