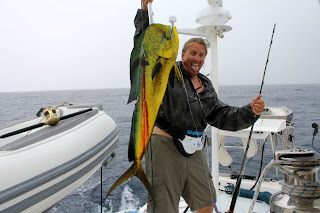 We set sail for the short 25 mile sail north to Rabi Island in partly cloudy skies but soon the weather turned for the worse. A wall of black clouds was coming up fast and soon it was pouring rain and our visibility was down to a few hundred feet. The Mahi that was following us did seem to mind a took hold of the purple cedar plug an the fight was on! This was our third Mahi of the season and turned out to be the biggest one too! After a 20 minute fight and a few squirts of whiskey in the gills and it was all over with another nice Mahi in the freezer.

The waters around Fiji are dangerous with numerous uncharted reefs and most admiralty charts in this part of the world date back to the late 1800’s so we are always extra cautious going through the passes.


Since we arrived 5 weeks ago we have heard of 3 boats lost this season. The first was a boat Touché that left from a bay we had just been in a few days before and bumped on their way out of the narrow pass and they decided to keep going to keep an appointment to pick up guests in Savusavu. One bad decision led to another and they soon found themselves being crushed on the reef by 20 foot waves. Another tragedy was boat that was bound for Tonga from Nuie (the same route we took) and hit an island and the two sailors aboard were never found. Our friend Bob on Braveheart was one of the boats that spend time in the unsuccessful search for survivors The last boat to be lost was another bad chain of events or not enough chain of events….the owner lowered the anchor and went ashore without making sure the anchor was set properly. After way to many bowls of kava with the chief they returned to where they left the boat and it had vanished! They had anchored the boat on a rising tide and had not put enough scope (chain) out and the rising tide lifted the anchor and the boat drifted off with the anchor hanging in clear blue water. The owners spent $12,000 on a search plane to locate the boat but at this point we are not sure if it has been recovered or not? 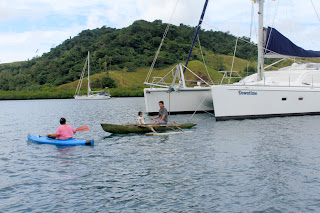 Rabi is a island inhabited by the Banabans a people displaced from Ocean Island by mining operations. They were given the land by Fiji and are now their own people. The men have homemade dugouts that they fish from and like most of these islands the Methodist Church plays a big role in supporting the islanders. We were warmly greeted by several locals who came by in their boats offering local fruits. 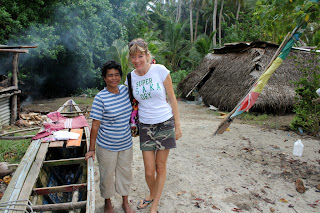 The next day we drove SD around the 8 mile long island and saw all its rugged coastline and stopped in a few bays, one was Albert Bay on the north end of the island and we met a lady drying copra (coconut meat0 over a fire next to her small hut. 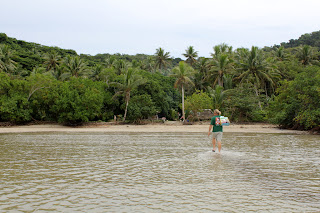 Later we went to the village in Katharine Bay with our bag of gifts and handed out toys, shirts and candy to the kids. One thing we found that is a lot of fun is bottles of bubbles. I take a big wand and make huge bubbles and the kids jump around popping them. We hand out small bottles and they have so much fun with this simple gift. Candy is a real treat for these kids and they are very polite and everyone says thank you and waits their turn. When you ask if everyone received candy they are honest and make sure all their friends have received some before asking for more. 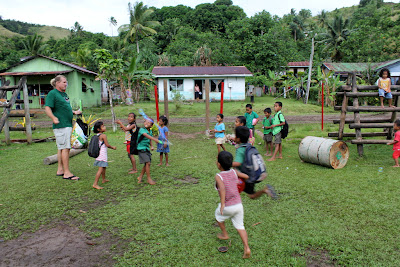 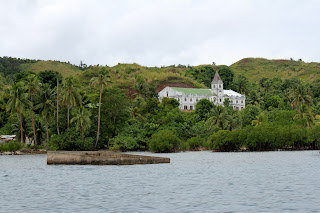 We walked through town up the hill to the 70 Year old church that took 50 years to build! The pastor met us and gave us a tour of the facility and some history of the village. This building was huge, at least 150 feet long and 8o feet wide. The lower level was open space used for community meetings and the upper level was the sanctuary. Built out of block and concrete it has held up to decades of storms and still in pretty good shape, the only real damage was that they lost the roof a few years back in a typhoon.

Across the bay is a small river that leads to another part of the village that we drove SD up. The village has about 500 people living in it and it is amazing how nice everyone was to us. The small generator is shut off by 8:00 pm and at 5:00 am and drum is sounding at the church to signal prayer time and the start of a new day.