Nations around the Pacific Ocean are on full alert as a tsunami triggered by a 8.8 magnitude earthquake in central Chile brings higher than normal waves. Tsunami warnings have been sounded in an area affecting about a quarter of the globe. Waves have spread from the epicentre of quake and may strike land bordering the Pacific in the next 24 hours.Warning systems have improved since the 2004 Indonesia quake sparked a tsunami that killed nearly 250,000 people. Nations affected by the Pacific "Rim of Fire" have all sounded alerts, trying to estimate the anticipated time of arrival of any tsunami.

The Pacific Tsunami Warning Center has said there may be "widespread damage" from high waves.

"Authorities should take appropriate action in response to this threat," it said.

Large waves are reported to have struck Chile's Juan Fernandez island group, reaching halfway into one inhabited area. Three people there are missing, local media say. Two aid ships are reported to be on their way.

Part of the Marquesas Islands in French Polynesia were hit by a 4m (13ft) wave, but no casualties were reported, AFP news agency said.

It has been difficult to estimate the possible wave heights of any tsunami - the waves may not arrive at all or could be as high as 10 metres above normal sea level.

In Tahiti, traffic was banned on roads less than 500m from sea, and residents on low-lying land were told to get to higher ground, but the first tsunami waves were smaller there, measuring only 36cm.

New Zealand has warned waves up to 3m could hit the main North and South Islands plus outlying islands.

Waves measuring 20cm hit the Chatham Islands, about 400 miles from the mainland, about 1905 GMT, but the Ministry of Civil Defence warned that "the greatest wave heights will occur between six and 12 hours after the initial arrivals."

Sirens were sounded in Hawaii to alert residents to the tsunami threat several hours before waves were expected.

John Cummings, Oahu civil defence spokesman, said: "Get off the shoreline. We are closing all the beaches and telling people to drive out of the area."

Japan may be hit at 0300 GMT on Sunday, the country's meteorological agency said, calling for people to be fully alert.

California has also warned its coastal cities to prepare for possible tsunami waves, the first strike possibly around San Diego.

The Cook Islands, Kiribati, Niue, Tonga, the Solomon Islands, Fiji and Vanuatu could also all be at risk. 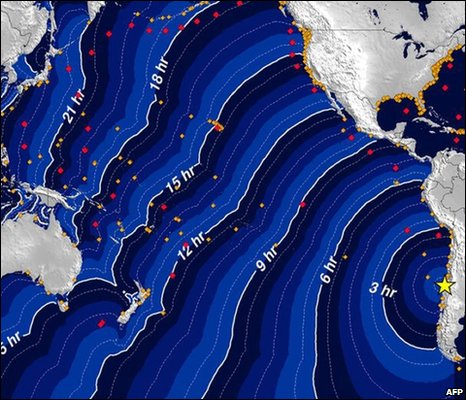 Comment by Roba on March 1, 2010 at 1:49am
Wow some of these islands have no mountains its an atoll....like Kiribati and some parts of Tonga ..where they will run to for safety? in case a Tsunami comes? Hopefully it doesnt hit these islands.